What's inside a pumpkin?


Teaching children is such a joy to me!  Even more than that, teaching two year olds is the most exciting thing to me! This is my first year teaching at but I have had experience teaching two year olds before and when I was given the opportunity to teach this age group again, I was ecstatic!  It has been so exciting to already see the two year old class grow and learn new things.  I love that, what we as adults would think it is the simplest thing, they are so excited over.  The month of October we have been learning about the color orange and talking ALL about pumpkins.  We have talked about their shapes, texture, stems, and what is inside a pumpkin.  When we asked what was inside we got answers such as seeds, orange, water and even a few were convinced there was a pumpkin patch IN the pumpkin! I loved the creativity in children!   After we talked about and let the children play with the pumpkins we decided to cut into them.  They were finally able to see what was really in the pumpkin! After we gutted the pumpkin we created a sensory bucket of the seeds and “guts” for the children to be able to feel and play with it.  As an adult all I could think was “Ugh, this is gross,” or “Maybe I should just throw this out,” but as a teacher I HAD to let the children explore and I was so excited to watch them as they were learning.  I know this seems crazy to think that they were learning while they were just playing with the “guts” of the pumpkin but I was able to ask questions like “How does it feel?”  “What color is it?”  “What could you make with it?” “What do you think the seeds taste like?” After we asked all those questions they were able to actually taste the pumpkin seeds.  I toasted them and brought them back to school and with the AM snack I gave each of them an opportunity to taste them.  Of course they were a different texture so most of the children didn’t really care for them but I had a few that kept asking for more.  Most people probably would have no clue that so much learning could come from just a simple pumpkin but the children are beginning to learn the difference of bumpy or smooth,  tall or short, the color orange, and what a circle looks like.  As adults we have to remember that everything around us is a learning environment for children, we just have to let them learn and explore, even if that means getting the “guts” of the pumpkin all over us! J
-Shelley (Two Year Old Teacher) 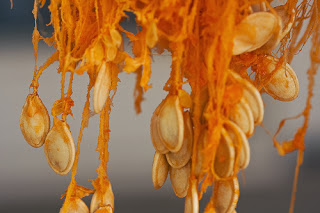